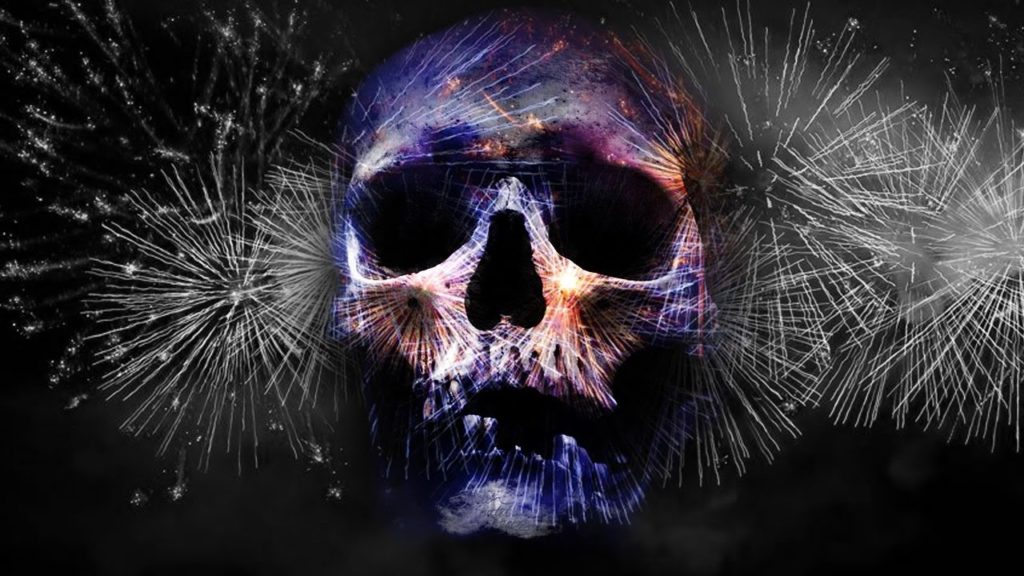 I’m a horror host, so watching good (and mostly bad) horror movies is what I do. Of course the market is saturated with movies set on, around and having to do with Halloween. What about other holidays? In recent years a slew of Christmas horror films have emerged and there is the occasional Valentine’s Day movie. Whatever the holiday, I like to get in the spirit with some horror-related films. As we tell 2020 to kiss our asses, get the hell out of here and welcome 2021, here are five flicks to help you ring in the New Year in typical horror fashion. Many of these are perennial favorites that you may have seen and some are stinkers, but hey, what else do you have to do while quarantined?

Six teenagers get into trouble with three angry carnival workers. They flee the seaside carnival and escape with their boat in tow. When their sailboat capsizes, the six friends end up stranded on Grand Island. What is bizarre is that on the island is an empty hotel untouched by time. It is eternally New Year’s Eve 1959 in the hotel. It appears that the resident ghosts have no plans to leave and they aren’t too fond of trespassers. When the teens begin to meet their demise, are they being picked off by the crazed carnies who followed them, the ghosts, or something else?

This British movie is a campy, fun little ride. Complete with 80s hair, tacky attire and teenagers with plenty of angst, Bloody New Year embodies the 80s in a nutshell. There are some silly scare scenes, creative ways to kill people and a bizarre snow globe scene.

Bloody New Year features a fairly impressive kill count of 10, with my favorite being the rotating head.

Shot on location at Butlin’s Barry Island in Wales, the same setting as the Doctor Who story, “Delta and the Bannermen.”

Director Warren wanted the film to be a lot bloodier and scarier and kept meeting resistance from the producer, something I can sadly relate to. Also, budgetary restrictions prevented Warren from getting the special effects he envisioned, which plagues most low-budget productions.

Released in some markets as Time Warp Terror.

It’s 1999 and people are worried that Y2K is going to bring about the end of the world due to widespread computer malfunctions. The Vatican, however, believes an even more insidious force will wreak havoc on December 31st, Satan. In a race against time, Satan must be stopped before he can impregnate a woman on New Year’s Eve thus giving birth to the anti-Christ and bringing forth the end of days.

Arnold plays ex-cop, Jericho Cane, who now runs an elite security team. Arnold has to solve clues, find Satan’s intended bride (Tunney) and keep her safe. In typical Arnold fashion, he goes to battle with the devil himself (Byrne), as only Arnold can do. While Arnold had top billing, it is actually Byrne’s performance that saves End of Days.

This is one of Arnold’s better movies. Naturally, the film is rife with biblical references, some accurate and some taking quite a bit of creative license. If you enjoy good vs. evil themes and Arnold as his badass self, dust this one off and give it another watch.

After having heart surgery, insurance carriers and studio executives came to the set to make sure Arnold was physically up to the task. It didn’t take long for the execs to realize Arnold didn’t have any physical limitations.

It was initially reported that Sam Raimi or Guillermo del Toro would be directing the film. It would have been a much different movie with Raimi at the helm.

Three friends embark on a snowmobiling adventure on New Year’s Eve. When one of their snowmobiles breaks down, they end up stranded at a lovely isolated lodge. There they encounter a bizarre old woman who has a rather strange friend in the basement. In typical fashion, they then begin meeting their demise. Who will survive the mayhem?

Ghostkeeper doesn’t feature a high kill count, but it does provide a throat slashing, almost drowning, gunshot, chainsaw scene and an impalement, so they pretty much covered all the bases.

The pace is very slow but the scenery is gorgeous and the soundtrack is nice.

This movie had potential. The setting is reminiscent of The Shining and the original script had an interesting twist. Unfortunately, half way through filming the production ran out of money. Rather than scrap it, Makichuk decided to wing it for the second half, abandon the script and whatever happened in one take is what made it to the final print. The plot suffered greatly with this approach and the movie has no cohesion or clear vision. Still, if you’re a fan of 80s B-movies, it is worth a watch.

If you’re a fan of Prom Night with Jamie Lee Curtis you may recognize a part of the score, as composer Paul Zaza reused some of the score to save money.

A Los Angeles DJ hosting a New Year’s Eve party receives a telephone call informing her people will be killed in every time zone that evening with her as the final victim.

New Year’s Evil has a respectable body count of six. None of the kills are unusual or creative, just your standard slasher fare.

If you’re into 80s punk rock, you’ll enjoy the score on this one and the Hollywood scenery makes me homesick. Be warned, if you can’t stand punk or new wave music, you may have nightmares considering how many times the New Year’s Evil theme song is played during the film. I actually think the music is the film’s best asset.

Visually, if you could give a movie an award for bad makeup, bad hair and bad clothes, this one would definitely win.

See if you can spot director Allston’s cameo appearance as a bearded camera operator.

A train full of drunk, stoned and rowdy pre-med students, all in costume, take an all-night party trip. What could go wrong, right? One by one a serial killer takes them out and assumes their identity by donning the victim’s costume. This constant changing of costumes makes discovering the killer’s identity all the more challenging.

Terror Train has quite a high body count, as the first murder occurs even before the train leaves the station. All in all, we end up with 10 bloody victims. (The cadaver in the beginning doesn’t really count.)

Worst pick-up dialogue in a movie, ever:

Doc: Mo and I worked in an emergency gynecological ward last summer.

David Copperfield, the magician, appears as, you guessed it, a talented but brooding magician. Actually, his scenes are some of the highlights of the movie.

Academy Award winner Ben Johnson, who plays Carne, had an illustrious career acting in dozens of westerns. Johnson only appeared in one other horror film, Swarm.

The character of Merry (Cleopatra costume) is played by none other than Vanity of Vanity6 fame. Vanity was Prince’s protege and she died 67 days before Prince.

None of these older movies are true gems, so if you’re a filmmaker and you’d like to create a masterpiece, contact me and let’s make it together. I have some great ideas.

Whatever you do on New Year’s Eve, please stay safe so you’ll be here to celebrate next year.

Have a Horrorific New Year,